At Bromio we have decided to start a small development blog to give some insight about the development of Pato Box and to start it we have decided to answer a question we get quite often, what is the story behind Pato Box? The person comissioned to clarify such an important matter is César Arminio, the creator of the character which shared with us this great explanation:

“I usually find myself stuck in a traffic jam in the place where I live. But I remember one time I was in the car and a flashing image of Pato Box came to mind. It was not an image of the videogame. Not the levels, not the enemies, not the story. Just the duck, as if it was looking at me with his piercing eyes: the two little dots in his face. We had just returned from PAX East 2017 so the image for the billboard we had at our booth was still fresh in my memory. 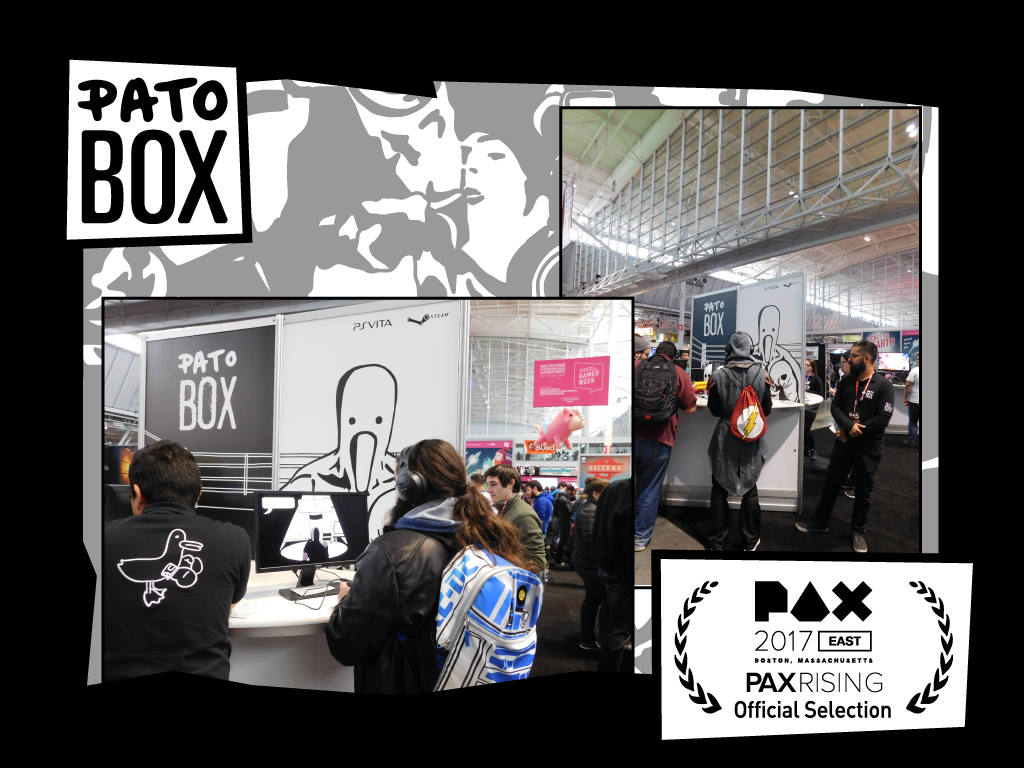 I started to remember where the character came from and I laughed, all the people around looked at me as if I was losing it completely. The more I remembered the harder the laughter. I ended up crying that day, alone in my car because of that story and how stupid some details were. I wouldn’t believe it myself if someone told me the story.

I can’t remember the exact date but, it was sometime around January 2016. At the time I was working alongside my partner Sara in 2think design studio, our own small graphic design business. A project involving editorial design for a children’s text book was at hand and I was in charge of creating some of the illustrations. Our client often sent the information we needed to include in the book. All the text, symbols, images… all the details.

I was about to finish the entire list of illustrations and then it happened. The list contained four words: pato guantes de box, which translates to “duck boxing gloves”. In my confusion I asked Sara what her thoughts were and showed her the brief. We read the list over and over again and it didn’t make sense because that kind of image wouldn’t match the logic of the rest of the design. We concluded a comma was missing or that it was some kind of typo.
I couldn’t keep wasting time trying to figure it out so I started drawing the duck.

It was late… I was tired and those two images were the last ones so I could go home. A natural impulse to finish the drawing made me add the boxing gloves to the duck… and it was hilarious. I showed the drawing to Sara and she laughed, she really liked it and told me it was really cute. We decided we could send that drawing to our client and see what happened. 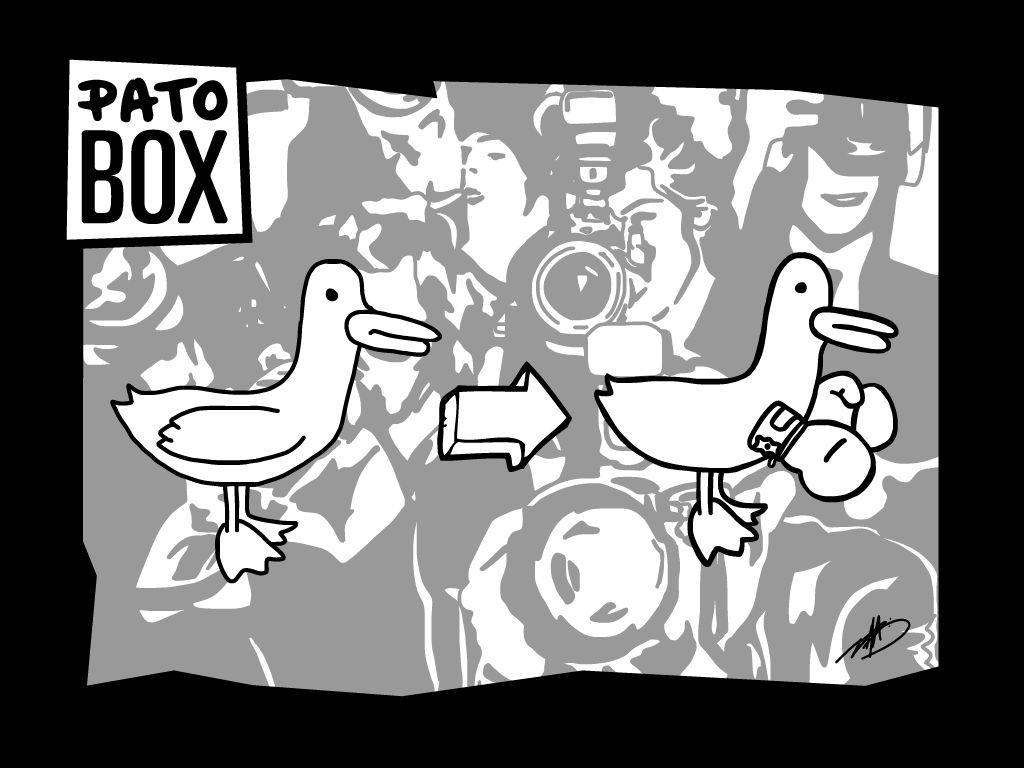 When I came home I could not stop thinking about that boxing duck. I felt the need to give him a backstory, some kind of personality. I decided to create a little comic strip around it but a name was needed. At the time the idea of merging those two elements was so plain and stupid that I decided to give it a name to match its simplicity: Pato Box.

I didn’t rest that day. Went to my computer and what originally was meant to be a comic strip turned into an idea for a graphic novel. I wanted to give some kind of contrast to the character putting it in a very realistic environment. Added the ideas of mafia, deception and treachery around the duck’s career. And it became funnier, much more interesting but it lacked something… the duck needed some muscle for his adventures. And once again the original idea evolved. 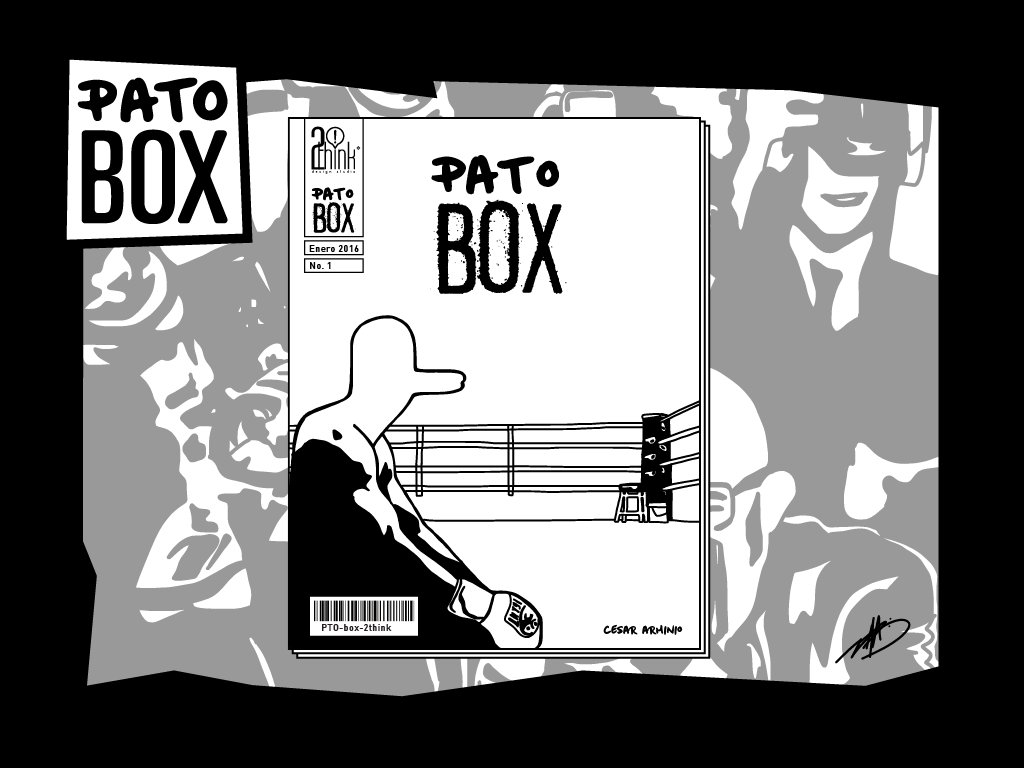 At the end of the night the raw concept of the comic book I wanted to create was almost ready to use it as a reference in the future. It was full of typos, the graphic design was poor in typography and I was missing all the illustration backgrounds but the concept was there so I could continue developing the story and character on my spare time.

The next day I decided to show it to my friends and see their reactions. They loved it. Even shared ideas to the story and character details. Antonio Gutierrez (Producer, programmer and game designer at Bromio) one of my closest friends suggested turning the idea into a videogame in the future. Luis Vázquez de Lara, another friend of mine, was mesmerized watching me create illustrations around the duck. He later on became the music composer of the game.

My passion and dream was always to take part in the creation of videogames, so much so that I have been working on personal prototypes on my own. I had the opportunity to assist two global game jams with my friends which, at the time were organized by Bromio in my hometown. Those experiences gave me the groundings of what is like to work in the creation of a videogame.Long story short, a while later I ended up collaborating alongside Bromio when they needed a graphic designer, and presented the comic of Pato Box to them in one of their briefs to create their next game. The rest is for a longer story.

So yeah… you could say this path was created by collaboration and hard work, but it all started by the fact someone missed a comma between two ideas, a simple typo. That is something to laugh about. A stupid duck born out of a stupid mistake.”

Please let us know in the comments any question you have and if you would like to keep having this kind of content in our blog.

A memorial for our beloved partner, mentor, and friend Nick Alfieri, who sadly and unexpectedly passed away, will b… https://t.co/dZ2V7mYS5N

Reply Retweet Favorite
A new @Kickstarter update focused on our messy inventor, Thomas! We also give a shout-out to @2think_ds ' Glory Hun… https://t.co/dfTHR4jsjx

Reply Retweet Favorite
After our Art Stream this week where our art team drew many fun Moog sketches, we ended up with this magic 😂 https://t.co/P8pQC3u6yi

Reply Retweet Favorite
The music in Remnants of the Rift goes HARD! Here's our latest @Kickstarter update about Controvol who does sound d… https://t.co/5efzTaz9Fb